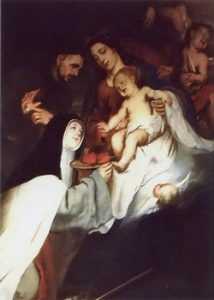 Her confessor, the Franciscan, Reverend Fr.  Gabriel-Maria, provides the answer. Thanks to his writings on St. Joan, we can grasp to some extent the source of this love for the Eucharist. The treaty on devotion, which Gabriel-Maria wrote for the Marian confraternity, describes the way in which the Virgin Mary was leading Joan to a special love for the Eucharist, meditation on the Word of God and the Passion of the Lord. „There are three things that I love above all others. They are: listening to my Son, His words and teachings […], meditating on His wounds, Cross and Passion [and finally, thirdly] the Blessed Sacrament of the altar or the Mass, which I hold in the utmost reverence and devotion” (Les Sources, p. 893). Father Gabriel-Maria explains: „The Blessed Mary’s third devotion was the Most Holy Sacrament of the altar. We state this on the basis of the following text: ‘They devoted themselves (…) to the breaking of the bread’ (Acts 2:42)” (Les Sources, p. 911). One cannot help recalling another passage from the Acts of the Apostles: “They devoted themselves to prayer, together with the women and Mary the mother of Jesus (…)” (Acts 1:14).

The Virgin Mary gives Christ to the world and leads us to Him. We can say with confidence that Mary introduced Joan into the depths of the mystery of the Eucharist in a very concrete manner. Joan was marked by a great reverence for the Eucharist which she received from Mary. “During Mass and before the Blessed Sacrament, try to show your respect by attending Mass at least once daily if you can. And whenever the Body of Christ is carried in procession or to the sick, join the procession with reverence […]. For my Son and myself are very pleased, when the Christians surround the Blessed Sacrament with reverence” (Les Sources, pp. 894-895). Joan’s respect for the Eucharist is the expression of her love for Jesus in the Host. The Eucharist has the power to renew the core of our being, to transform the heart of the recipient of Jesus in the Host, leading him toward the good and to offering to others all that is best in him. Joan’s love for the Savior bore fruit in the form of her tender compassion for the poorest. Was she not quickly dubbed the good Duchess? Like Mary at Cana, Joan was responsive to any manifestation of misery in her duchy. “Joan was guided by charity, especially towards the poor widows and orphans; she helped them in every need […]. The esteemed Lady was so filled with love that she often – with her own hands – bandaged wounds of the poor who were sick and covered with sores” (Les Sources, p. 352).

The Eucharist is the power of love
Joan’s Eucharistic life flourished in her love of neighbor. Everyone recognized her concern for the poor, and she spared nothing in alleviating any human misery. In her circle of people she started a small group that made discreet inquiries into the whereabouts of the poor who did not dare to reveal their needs (Les Sources, p. 352). Joan was also able to alleviate those in anguish of spirit, accepting at her residence women who, like her, had experienced the bitterness of the marital bond. Testament shows her concern for everyone. She bestowed goods in her duchy on poor students, lepers, widows, monasteries, and even well-to-do individuals (Les Sources, p. 555).

A certain episode from Joan’s life cannot be overlooked here. It was recorded in the Chronicles in order to emphasize the bond – which she herself lived – between her devotion to the Eucharist and her ministry to the poor. On Holy Thursday, Joan wanted to re-create the Last Supper for the poor. In imitation of Christ the Savior, she washed and wiped the feet of 13 poor people, invited to celebrate this Mystery. After the celebration, these people were treated to a wonderful feast, during which the Lady served (Les Sources, pp. 78-79).

Was it not the Virgin Mary’s wish in teaching Joan to love the Eucharist to introduce her to the path of love, to deep and intimate union with Christ? The Chronicles report that one day, by means of a special grace, Joan saw herself invited by Jesus and Mary to a banquet. “My Savior and His Blessed Mother prepared this banquet for me” (Les Sources, p. 452). Joan’s vision, in which Mary is presented, is entirely immersed in the mystery of the Eucharist. This banquet was reminiscent of the Eucharistic banquet – the food of eternal life – and Mary personally invited Joan to consume it. There were two hearts on the platter and Mary told me to eat (Les Sources, p. 452). The heart is the dwelling place of love. In this vision, Joan’s heart was completely united with the heart of Jesus, becoming that what she has received. Jesus asked me to give Him my heart. So I reached for my chest to remove it, but to my surprise I did not find it there(Les Sources, p. 452). Joan had no regard for herself. Her gaze was completely fixed on Christ, the object of her love. For this reason, she was able to contemplate Jesus and return His gaze: Jesus looked at me with great tenderness (Les Sources, p. 452). The author of the Annunciade Chronicles was not mistaken, stating that Joan could not find her heart in her chest, because it was already more with Jesus than with her body, which it animated. She was at the level of unifying and transforming love (Les Sources, p. 452).

The Eucharist has the power to unite us with Jesus, by renewing the very core of our being and transforming the depth of the person that accepts Jesus in the Host. It found its full, strong, and exemplary realization in the person of Joan. The aforementioned grace of union seems to confirm this idea. This aspect of Joan’s life has been particularly well captured by artists. The painting from the old Annunciade convent in Tirlemont (Belgium), now located in the monastery in Westmalle, depicts this incident. It is a 17th-century canvas, belonging to the school of Rubens. The Virgin Mary is shown holding the Baby Jesus, while Joan – kneeling before them – receives a platter bearing two hearts. Saint Francis of Assisi stands behind her, looking at the scene and indicating the stigma of his right hand, as if saying that „through meditation of the Passion of Christ and His holy Wounds, Joan discovered the unfathomable treasures of love of the Hearts of Jesus and Mary” (A. Girard, Marriage Mistique, p. 9).

The image of the banquet, which is a symbol of eternal life, can easily found in the Gospel. The Eucharist is the food for life eternal. In this context it would be proper to read extensive excerpts from the Gospel of St. John. There the heart is the driving force of life, the abode of Love. In the aforementioned vision, Joan’s heart was completely united with the Heart of Jesus, and she became that what she had received. Thus, we may say that her vision was permeated with the mystery of the Eucharist.

In that “mystical feast,” Joan was sure to receive the grace of Peace, which the Risen Jesus promises and gives to His disciples. “It was a foretaste of future glory, the perfect example of the blessed state of unifying love, which may be achieved in this life only in a small measure, when the soul is more in God than in itself, in this body that it animates, and when it says after St. Paul: “I live no longer, but Christ lives in me” (Jeanne de France, by Louis Dony d’Attichy, OFM, 1644, p. 328).

“We get to know God only in part with the help of faith”
Joan’s intimate relationship with Christ points to the experience of the „mystical marriage” that come to pass in the deepest parts of the soul, which – according to St. Teresa of Avila – is the dwelling place of God.

Artists grasped the depth of Joan’s intimate bond with Christ, developing in iconography of the theme of the “mystical marriage.” A considerable number of paintings were produced to represent the scene.

On one of them we see Joan, holding the cross in her right hand; on her left we see a child that has a basket filled with tools of martyrdom and points to Baby Jesus, who places an engagement ring on Joan’s right hand. By contemplating this scene, we realize the depth of her union with Christ, who is Love and the Bread of Life. In the depths of Joan’s soul, the Eucharist was like a doorway, leading her to eternity. This can be also true for us, who daily participate in Holy Mass, although with the help of faith, in accordance with St. John of the Cross stated: “in the night.”

ORIGINAL RULE OF THE TEN VIRTUES OF THE MOST BVM